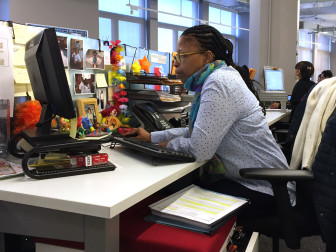 NEW YORK — The cycle is often triggered by something simple: refusing to do homework, leaving clothes on the floor, typical kid stuff. But for the nearly 10,000 children in New York City’s foster care system and the adults who serve them, simple stuff has a way of escalating.

Former caseworker Freda Forbes remembers emotional late-night moves all too well, feeling torn between going home to her own children and putting in the extra hours for kids who needed her just as much, maybe more, as she tried desperately to salvage relationships between foster parents and the children in their care — or place them somewhere else, sometimes immediately.

Placement in the child welfare system is traumatizing for children, says Forbes, and they frequently react with challenging, defiant behavior. Without skills to deal with that behavior, foster parents can easily become overwhelmed and tensions quickly escalate.

Too often Forbes ended up calling her own children hours after she should have been home, blowing them kisses and telling them goodnight over the phone.

“I wouldn’t go home until I knew I had a kid safely placed in another foster home,” said Forbes, who’s worked in New York City’s foster care system for 16 years.

New York City’s Administration for Children’s Services (ACS) has legal custody of children in the foster care system, and contracts with 23 local agencies to provide day-to-day services. After reaching an all-time high of almost 49,000 in 1991, the number of children in care has dropped in recent years, mirroring a national trend.

In 2013, with nearly 13,000 children in the system, the city sought to further reduce that number. ACS implemented ChildSuccessNYC (CSNYC) in five of its contracted agencies. CSNYC is a program that uses evidence-based practices to provide biological and foster parents skills they need to help reduce the number of scenarios Forbes describes.

A charge to reduce numbers

Evidence-based practice models combine research, clinical experience and family preferences to individualize goals and action plans. The cornerstones to CSNYC are now two training programs: Keeping Foster and Kin Parents Supported and Trained (KEEP) for foster families, and Parenting Through Change (PTC) for birth families. Foster parents, birth parents and caseworkers are trained to use consistent parenting strategies to create stability for children. All parents working with the CSNYC agencies are required to enroll in a 16-week training program and to complete a six-week refresher course once each year.

The New York Foundling, which employs Forbes, is the largest of the five agencies piloting CSNYC. Sylvia Rowlands, senior vice president of evidence based programs at The Foundling, said CSNYC is working, noting that the agency reduced its number of clients from 803 just before implementing CSNYC to 618 as of March 30.

Related Video: When the Caretaker Has Nowhere to Turn

“We just have a totally different relationship with people,” said Rowlands. “It has impacted the capacity to engage with families in these super difficult situations.”

To further assess the effectiveness of CSNYC, University of Chicago researchers are in the process of compiling data submitted by The Foundling and other agencies. An interim report released last year shows mixed results.

Children cared for by the five agencies that implemented CSNYC were 11 percent more likely to permanently exit foster care than those cared for by other agencies. Another ACS report indicates the total number in foster care during December 2015 fell to just under 10,000.

“One of the great tragedies is the number of moves kids experience,” said Andrew White, ACS deputy commissioner for policy planning and measurement. “Foster parents need to be supported so they can stick with these kids until they go home.”

Data collection on Strong Families is ongoing and should be available later this year, he said. His office will then compare results from the two initiatives to determine which model gets the best results and provides the most stability over time.

Both CSNYC and Strong Families are funded by a special federal waiver that makes funding available to ACS for reducing the number of kids in the system. ACS passes funding to agencies for implementation and caseworker training.

Now a CSNYC facilitator, Forbes said the trainings give parents the tools they need to deal with child behavior, which she says will reduce “disruptions” or moves from placement to placement. She says trainings like KEEP and PTC go a long way toward permanency by ensuring that birth parents, foster parents and caseworkers are all using similar parenting strategies.

At a recent KEEP meeting, foster parents talked about setting clear rules for children, using charts to monitor progress and setting and following through on clear consequences for not following rules. Birth parents at PTC meetings practice the same skills and strategies, making it easier for children during reunification. According to Forbes, consistency will ultimately result in increased permanency for kids — less time spent in the the system and will prevent children who leave from returning.

Sherri Fauci, 56, was initially skeptical when she learned about the required KEEP training. Once a week for 16 weeks seemed like a long time, she said. Plus she’d already raised kids of her own before stepping in to provide kinship foster care for her two grandchildren, ages 6 and 9. But after the first class, she was convinced.

“These folks have been good to me,” she said after a KEEP session in February. “I was scared in the beginning that they’d break up our family, but they said not to worry, it’s gonna be ok. And it is.”

Fauci said the support and camaraderie from other foster parents and The Foundling’s KEEP facilitators have been invaluable. She credits the program for helping her establish a consistent routine for her grandchildren, and she expects to get permanent custody within the next few months. This year, she completed a six-week refresher course.

“I didn’t feel alone in this anymore,” she said.

A system in crisis

In spite of success stories like Fauci’s, critics say the system is still in crisis.

In July 2015, New York City Public Advocate Leticia James and 10 foster children filed suit against ACS and the New York State Office of Children and Family Services (OCFS). The suit alleges that ACS and OCFS “fail to protect children from maltreatment, fail to ensure that services provided are effective and of acceptable quality, and fail to ensure appropriate placements” as a “direct result of ACS and OCFS failing to properly address structural deficiencies in the New York City child welfare system.”

In April and May of 2015, James’ office encouraged the public to share their foster care experiences by calling in to a hotline. The results indicated that among the 57 percent of children who experienced more than one placement, 26 percent reported experiencing more than five placements while in foster care. That’s a figure James’ office said, that “has been proven to lead to emotional trauma, attachment disorders, and cause children to lose a sense of stability and security.”

Published reports indicate a settlement, including independent monitoring of the system, was tentatively reached between the Public Advocate’s office and the state in October, but ACS has not agreed. Citing ongoing legal proceedings, James’ office would not comment on the proposed settlement or the effectiveness of any ACS programming, including CSNYC.

While ACS’ White said there’s always more to be done, he asserted ACS is moving in the right direction.

“The biggest thing we’ve been able to do is to bring fewer and fewer children into foster care,” said White, who credits ACS’ increasingly effective preventative services for reducing the number of kids in ACS custody to a low of just more than 10,000 today, compared to just under 11,000 in November 2014 and nearly 49,000 in 1991.

“For those kids who do need foster care, we need to do everything we can to provide stability,” said White, adding that it’s crucial to give foster parents the supports they need to succeed.

Foster parent Rowena Williams said children are better individually supported under CSNYC, which she says supports all aspects of a foster child’s development and gets them back into their homes more quickly. The program also allows for individualized help and is based on the child’s needs, including therapy and skills coaching, she said.

“Not only does this help the kids, it helps the foster parent be more effective with them,” Williams said.

Linda Johnson, an Adoption KinGAP worker with The Foundling, sees parents using the techniques during home visits. She said she’s seen initially skeptical parents who try using consistent, clear consequences — like temporary loss of video games or other privileges — with great success. Whether kids return to their birth parents or are adopted, Johnson said, they don’t need to start from scratch — they jump right into a system they already know.

After 16 weeks together, Johnson said, relationships between workers and parents also improve. “Parents will say, ‘I used this technique and you were right, it worked,’” she said. “And that can happen in large part because we understand that everybody makes mistakes; you just need to be willing to learn.”

Moving kids from placement to placement not only retraumatizes children, but it makes it difficult to retain good foster parents. The more effective parents are, the more likely they’re likely to stick with the system, Johnson said.

Fauci plans to devote her time to her grandchildren once she has permanent custody, so she isn’t planning to foster other kids. But she says she might have become a foster parent earlier if she knew about the support would get.

“I didn’t know how many kids were out there,” she said. “I tell my friends, ‘Be a foster parent — the kids need you.’”