Our Journalists: Coast to Coast

Jamaal Abdul-Alim is a senior staff writer at Diverse Issues in Higher Education. He is based in Washington, District of Columbia, and covers issues that range from college access to student debt. Previously he was a staff writer for Youth Today and for the Milwaukee Journal Sentinel.

Sarah Barr covers Washington for Youth Today and The Juvenile Justice Information Exchange. She loves telling the stories of children, their families and the people who work on their behalf. Sarah also has reported for the Bureau of National Affairs, Kaiser Health News and The (Raleigh) News & Observer.

Heidi Benson is a freelance reporter who previously was a magazine editor and a reporter and editor for the San Francisco Chronicle.

Deborah Esquenazi is a documentary filmmaker, radio producer, curator, and journalist who covers issues relating to crime, criminal justice, LGBT and women in the South and Southwest regions.

Ray Glier is a freelance journalist in Atlanta. He contributes to USA TODAY, The New York Times, The Miami Herald, Simon & Schuster (Howard Books) and others, in addition to Youth Today.

David T Kindler is a former community organizer and public relations official who photographs rock festivals and organizations that make a difference.

Elaine Korry is a reporter for print and public radio who is based in the San Francisco Bay area, where she covers health care and family and youth issues. Previously she covered social policy as a staff reporter for National Public Radio.

Gwen McClure is a freelance reporter, covering social justice and the justice system. She has written for Youth Today, the Juvenile Justice Information Exchange, Foreign Affairs and Al Jazeera America. She is now covering the Pacific from Auckland, New Zealand.

Sarah Mortimer is a freelance videographer and video producer based in Toronto. She has worked for Youth Today, the Juvenile Justice Information Exchange and the Village Voice.

Bartram Nason is a freelance photographer and filmmaker based in Atlanta. He has worked for Youth Today and Spin magazine.

Marco Poggio is an Italian-born freelance reporter and videographer based in Brooklyn, New York. He is also a translator.

Ana Ponzo is a photographer and digital artist working in Los Angeles.

Karen Savage is a freelance reporter in New York. She has written for Youth Today and the Juvenile Justice Information Exchange. Previously, she taught middle school math in Boston.

Stell Simonton is Youth Today’s Out of School Time (OST) beat reporter, focusing on innovative work with youth outside of school. Previously a digital editor at the Atlanta Journal-Constitution, she also written for the Christian Science Monitor, the Washington Post, Al Jazeera America and the Juvenile Justice Information Exchange.

Matt Smith is an Atlanta-based writer and editor, and a freelance contributor to Youth Today and Juvenile Justice Information Exchange. He has covered crime, courts and science — and their related public policy issues for variety of outlets, including CNN and VICE News.

Jason de Parrie-Turner is an independent filmmaker who also teaches throughout the Pacific Northwest. He has worked with Youth Today.

Brooke L. Williams is a freelance multimedia journalist based in New York City.  She writes about the criminal justice system for Juvenile Justice Information Exchange and Youth Today.

Gary Cohn serves as Los Angeles bureau chief for Youth Today and JJIE. A Pulitzer Prize-winning reporter, Cohn has been a journalist for more than three decades. He also teaches investigative reporting at University of Southern California Annenberg School for Communication and Journalism.

Celeste Fremon, creator and editor of WitnessLA, is an award-winning freelance journalist specializing in gangs, law enforcement, criminal justice and juvenile justice. She is the author of “G-Dog and the Homeboys,” and is working on “Downfall,” about corruption and brutality inside the Los Angeles Sheriff’s Department. She taught reporting at Annenberg and literary journalism as it relates to social justice at the University of California at Irvine.

Daryl Khan, as New York City bureau chief for the Juvenile Justice Information Exchange and Youth Today, writes in-depth features on a wide range of topics. He also produces data visualization projects and videos in collaboration with students and recent graduates of the City University of New York Graduate School of Journalism. Based in Brooklyn, Khan has also written for the New York Times, Newsday and Boston Globe, and has covered breaking news, politics, prisons, poverty and terror attacks.

Leonard Witt is the executive director of the Center for Sustainable Journalism (CSJ) and publisher of Youth Today and the Juvenile Justice Information Exchange. Witt has been a journalist for more than 25 years, including being editor of Sunday Magazine at the Minneapolis Star Tribune and Minnesota Monthly magazine. Before entering academia in 2002, he was the executive director of the Minnesota Public Radio Civic Journalism Initiative. He deeply believes in the need for journalism in a democracy and in fulfilling the mission of CSJ: To discover innovative ways to produce financially sustainable, high quality and ethically sound journalism via applied research, creative collaborations and innovative projects to test the viability of niche, nonprofit journalism. Witt is a Professor of Communication at Kennesaw State University. Contact Leonard Witt.

John Fleming, executive editor for CSJ, worked as a correspondent in Africa for several news agencies including Reuters, was editorial page editor of The Anniston (Alabama) Star and is co-founder of the Civil Rights Cold Case Project. Contact John Fleming.

Leslie Lapides is the senior editor of Youth Today and managing editor of Juvenile Justice Information Exchange. She has been senior news editor and business editor for the Knight Ridder/Tribune News Service in Washington and edited for the Atlanta Journal-Constitution and the CNN wire service. She says she has found her bliss in Kennesaw, Georgia. Contact Leslie Lapides.

Roger Newton is the video editor for the Center for Sustainable Journalism. He started working as a videographer after graduating from high school. He lives in Ellijay, Georgia, and is one of eight children.

Rachel Alterman Wallack serves as Youth Today’s managing editor. After working more than 20 years in the youth development field in Atlanta, she now guides YT’s coverage of news and views and still loves working with teenagers in the after-school program she started in 1993. She has a master’s in social work focusing on children and youth. Contact Rachel Alterman Wallack.

John Lash is the social media voice for YT and JJIE on Facebook and assists with other Center for Sustainable Journalism social media platforms. He is executive director of the Georgia Conflict Center and has a master of science in conflict management. Lash is a writer, peace educator, news curator and social media junkie. He learned about justice the hard way, doing nearly 25 years in Georgia prisons from age 18-43. He works to let people know what works  (skills, dialogue, meeting basic needs) and what doesn’t (punishment!) @JohnLash1

Gwenette Writer Sinclair is the social media strategist for Center for Sustainable Journalism and the website developer for Foster Care: Realities, Transitions and Hope and Substance Use: New Focus, New Solutions.  Writer Sinclair developed and maintained Kennesaw State University’s Second Life virtual campus from 2008-2012 and was the virtual world consultant and trainer for CSJ’s virtual world immersive journalism project in 2015.

Christopher Hayden, as web producer for CSJ, maintains the editorial and advertising content for our main websites YouthToday.org, JJIE.org. and Bokeh.jjie.org.  He created the site domain for our digital magazine projects and collaborates with TigerTech to maintain the WordPress server installation that supports the websites of both Foster Care: Realities, Transitions and Hope and Substance Use: New Focus, New Solutions.

Many thanks for the creative and patient assistance on our Foster Care and Substance Use digital magazine websites provided by Jeremy at Press75 and the support staff at TigerTech.

Special thanks to the Conrad N. Hilton Foundation for its support. 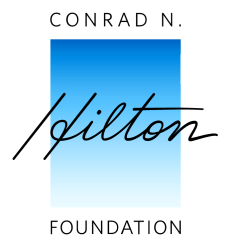