The Los Angeles teenager’s steadfastness helped him emerge from a childhood punctuated by a string of foster homes and arrests to become an ambassador to troubled youth.

Now he’s determined to learn how to get around in his new wheelchair.

And he’s determined that his anti-violence campaign can take root anew in Savannah, Georgia, where he’d taken that message of hope and transformation in October — only to find himself with a bullet in his spine. The outpouring of support he received after being shot and paralyzed during a robbery attempt made him want to come back, he said.

“I never experienced as much love in my life until I came to Georgia,” Clark said after a recent round of physical therapy. “I have no hard feelings against Georgia. Thanks for the love.”

Savannah police say the 18-year-old was shot on Oct. 10, after speaking to a community safety forum held by the Chatham County Juvenile Court. He was there with a group of teens from the California-based Brotherhood Crusade, which he credits with showing him a life beyond running the streets of south-central Los Angeles. 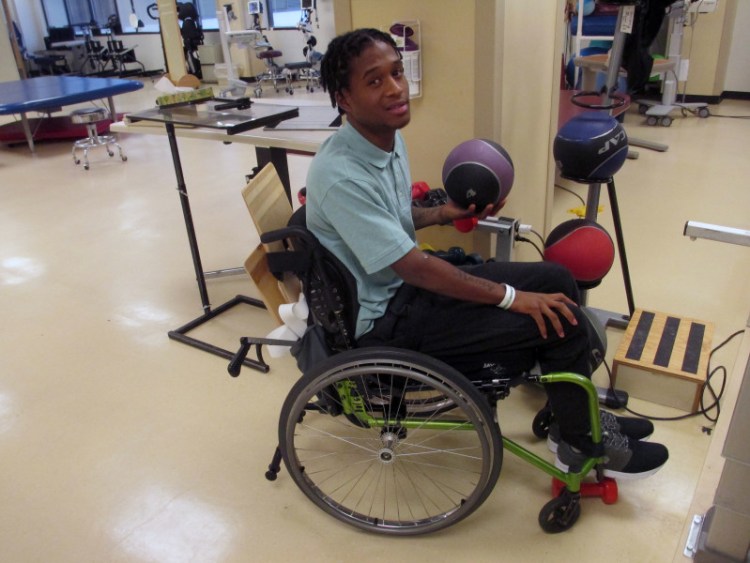 “They were the ones that probably connected with the group more than the others, because they were telling personal testimonies,” said Chatham County Juvenile Court Administrator Adam Kennedy. “The others were adults that were implementing programs with young people. But when you actually hear the voice of the young people, I think there’s a stronger connection — and all of those young men did connect and impacted the people that were there.”

Clark was 13 when he was arrested the first time, for burglary. He had been in foster homes since he was 6, when his infant brother was born with drugs in his system and authorities removed him from his mother’s home.

“I cried every day,” he said. “Six-year-olds know what’s going on. They’re not dumb.”

His first foster home was fine, but he had to move while the home was being renovated to accommodate extra children. The second home was awful.

“That’s where I got beaten,” Clark recounted. “The lady was drugging us, putting stuff in our applesauce to make us calm down and stay in one spot, and stuff like that.”

After two years, he was adopted by his original foster mother, Cynthia Clark, who also adopted Semaj’s brother. But by the time he was 13, he was hanging around older kids who led him into trouble. In the next two years, he would be arrested several more times for what he called “little small stuff, like stolen property.” 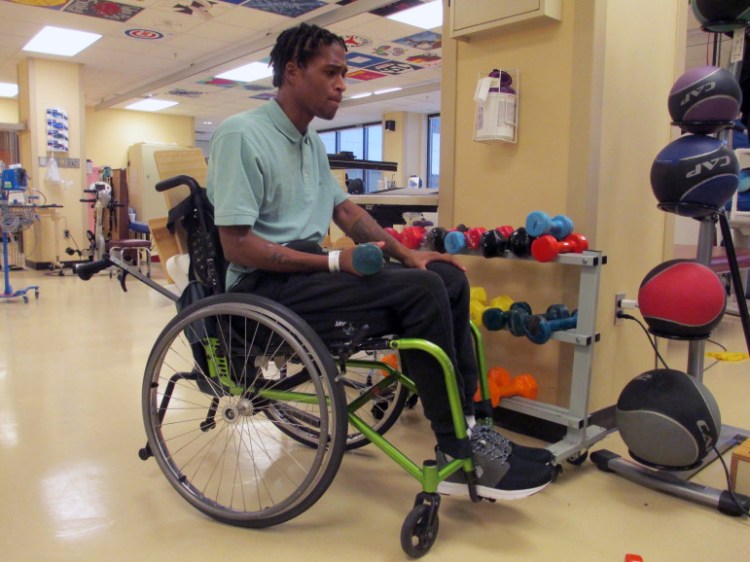 “I probably spent, like, a year and a half, two years altogether in juvenile hall,” he said. He dropped out of high school in 10th grade. But then he was introduced to the Brotherhood Crusade’s BLOOM program — Building a Lifetime of Options and Opportunities for Men — and its Reintegration Academy, which teaches its kids to see beyond their own difficult circumstances and raise their sights.

He became one of the Brotherhood Foundation’s youth ambassadors, speaking to other teens, to elected officials and policy wonks. In August, he was among a group of teens who met with President Barack Obama during a presidential visit to Los Angeles.

By then, he had earned his high school equivalency diploma and was enrolled in political science classes at California State Polytechnic University in Pomona. He was under the tutelage of Professor Renford Reese, who said he looks at Clark “like he’s my son.” It was Reese who took Clark and several other BLOOM alumni to Savannah — and who got the call from police when Clark was shot. 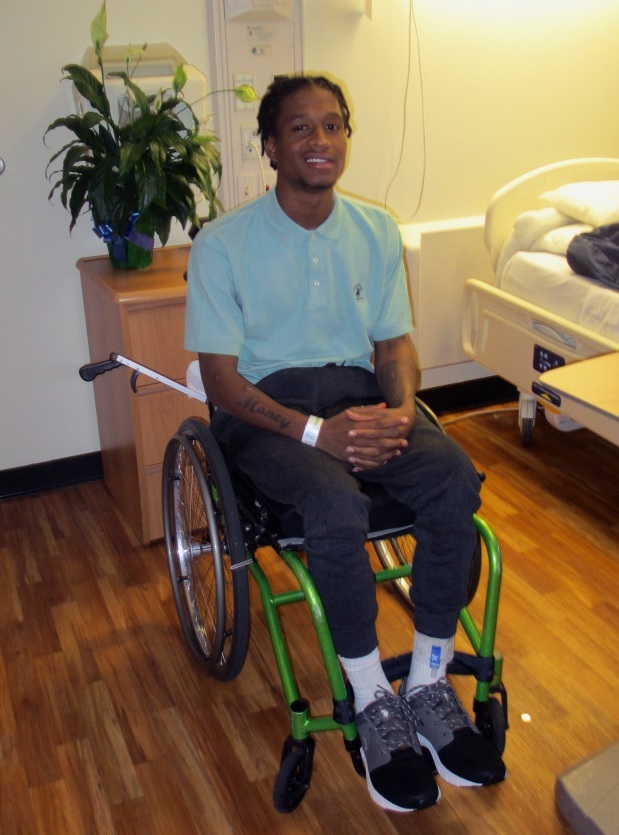 “You almost brace yourself to hear something like that when you’re at home in Los Angeles,” Reese said. “But you don’t get them out of one of the most volatile, dangerous places in the country and then bring them to Savannah and expect them to get shot in Savannah, Georgia. That’s really a cruel irony.”

After the community forum, Clark and one of his friends were walking down River Street, Savannah’s waterfront tourist strip, when some local kids approached them.

“I was just talking to them, telling them positive stuff,” he said. He called it “a natural instinct.” They talked him into coming with them a few blocks down the street, to the Yamacraw Village public housing complex.

“I had an instinct or a feeling that told me to stop, but I just didn’t listen to it,” Clark said. “I love to help kids. I love to help anybody that I see that used to be like me.”

But when they got to Yamacraw Village, beneath the landmark Talmadge Memorial Bridge, one of the kids pulled out a gun. When Clark and his friend tried to run, he opened fire. Clark was hit squarely in the back, the bullet ripping into the vertebrae behind the heart. His doctors told him he won’t walk again.

Clark just completed a month of physical therapy at the Shepherd Center, an Atlanta rehabilitation center for survivors of spinal and brain injuries. He’s got full use of his arms and “is getting to be fairly independent from a mobility standpoint,” said Dr. Gerald Bilsky, his attending physician.

“He can really take care of all his needs,” Bilsky said. “People who have injuries more in their neck often don’t have the ability to raise their hands. His balance is really good. He’s a young, 18-year-old, healthy kid.”

In his first two weeks at the Shepherd Center, Clark focused on the basics: getting dressed, bathing, getting in and out of cars. He had to exercise his arms, trying to build them up to be able to propel himself around.

“He’s a strong kid, but he’s going to be using his arm muscles in place of his legs. It’s easy to wheel down to the Panera Bread Company down the block,” Bilsky said, referring to an eatery downhill from the hospital. “Wheeling back up from Panera Bread Company is a challenge.”

It’s a challenge — but, Clark added, “I take everything as a challenge.” He still holds out hope of walking again, saying doctors “are just flesh and blood. They’re not God.”

“I can do a lot of things by myself. I learned a lot here,” he said shortly after being discharged. “It’s hard, but you’ve got to play the cards you’re dealt … I’ve got to just deal with it the best way I can.”

Now he’s gone back to Savannah, about four hours south of Atlanta. He’s working on getting enrolled at Savannah State University, where he plans to resume his studies, and transplanting his California-based outreach mission to the youth of Georgia.

“People see something really unique, and I think he realizes even more so now that he can be a voice of change,” said Reese, who is helping him get set up there. “He can be the spokesperson for an anti-violence movement, and his voice can be more powerful, more authentic, more credible even now than before he was shot. I think it takes a certain amount of maturity to understand why this happened and to see the positive consequences of something like this happening.”

A 17-year-old, Daquan Bryant, has been charged with armed robbery and aggravated assault in Clark’s shooting. Savannah-Chatham Metropolitan Police are still looking for two other people it described as “persons of interest” in the case, but no further arrests have been made, police spokeswoman Eunicia Baker said.

Clark says he has forgiven his attackers and wants to convince others to do the same.

“It’s about second chances and forgiveness,” he said. “You don’t know what that person has gone through. I don’t know what they were thinking or why they did any of that, so how can I judge somebody if I don’t know? I’m not a judgmental person. I’ve been in their shoes before.”